Inequality in Mumbai, India - where over 60% of the city population lives in slums.

Inequality in India - By the Numbers
1%
The top 10% of the Indian population holds 77% of the total national wealth. 73% of the wealth generated in 2017 went to the richest 1%, while 67 million Indians who comprise the poorest half of the population saw only a 1% increase in their wealth.
70
There are 119 billionaires in India. Their number has increased from only 9 in 2000 to 101 in 2017. Between 2018 and 2022, India is estimated to produce 70 new millionaires every day.
10x
Billionaires' fortunes increased by almost 10 times over a decade and their total wealth is higher than the entire Union budget of India for the fiscal year 2018-19, which was at INR 24422 billion.
63 M
Many ordinary Indians are not able to access the health care they need. 63 million of them are pushed into poverty because of healthcare costs every year - almost two people every second.
941 yrs
It would take 941 years for a minimum wage worker in rural India to earn what the top paid executive at a leading Indian garment company earns in a year.
(numbers by Oxfam)

The area surrounding the Bandra Kurla complex is a mixture of extreme wealth and extreme poverty, including the consulate generals of several countries, corporate headquarters, and the National Stock Exchange.

Dharavi Slum is one of the most famous slums in the world. The adjacent Mahim Nature Park was developed as a relief valve, an affordable way to escape the extreme urbanism which characterizes most Indian cities.

Simply put, Mumbai is...fascinating.
It's built on a slender, impossibly crowded peninsula surrounded on three sides by water. It contains the heart of India's most powerful industries, and some of its poorest slums - it's an urban jungle, a vertical aerie for the superrich, and a fragile marine ecosystem. Billion-dollar houses in the form of skyscrapers exist next to vast slums covered in blue tarps against the monsoon rains.
Informal recyclers in Dharavi exist within sight of the National Stock Exchange, traditional fishermen moor their boats in the shadows of skyscrapers in Worli, and leopards prowl the Sanjay Gandhi National Park on the city's northern flank. In short, it's a city of contradictions.
Even the new airport is stunted, India's second busiest, with the east section unfinished and a second runway impossible to build because of the slums which encircle the airport from all sides. A modern subway system is being dug below ground, while above the streets heave with every form of conveyance in a vast cacophony of horns blaring.
Love it or hate it, Mumbai is a model of the city in the 21st century - A Global South alternative to Manhattan, an awakening elephant in the fields of culture, science, industry, and architecture, and also a thoroughly in-progress, semi-planned experiment of extreme growth. ​​​​​​​

Architect PK Das has received accolades for his work mapping and enumerating slum dwellers within the city of Mumbai. He estimates that 60% of Mumbai's population is made up of slum dwellers - an incredible 7.5 million people.

Dharavi, a city within a city, is almost entirely made of grey concrete.

Indian slums are a complex place - at once a strange mixture of industry and grinding banality. We tend to think we have a pretty good idea of what they're like - films like "Slumdog Millionaire" have created a sort of Asian "slum chic" archetype - that is supported by the various slum tourism outfits in Dharavi.
These depictions are both accurate and inaccurate at the same time - the panoply of human existence is vast. The yearning, the romance, and the pain of everyday life is irreducible to a singular narrative arc. Moreover, even the term "slum" is problematic (although it seems Indian themselves rarely question the lexicon). How does one rectify the fact that industry in Indian slums is estimated at over $1 billion yearly? That the land itself is worth billions of rupees? That Dharavi is a crucial voting bloc in municipal elections?          ​​​​​​​ 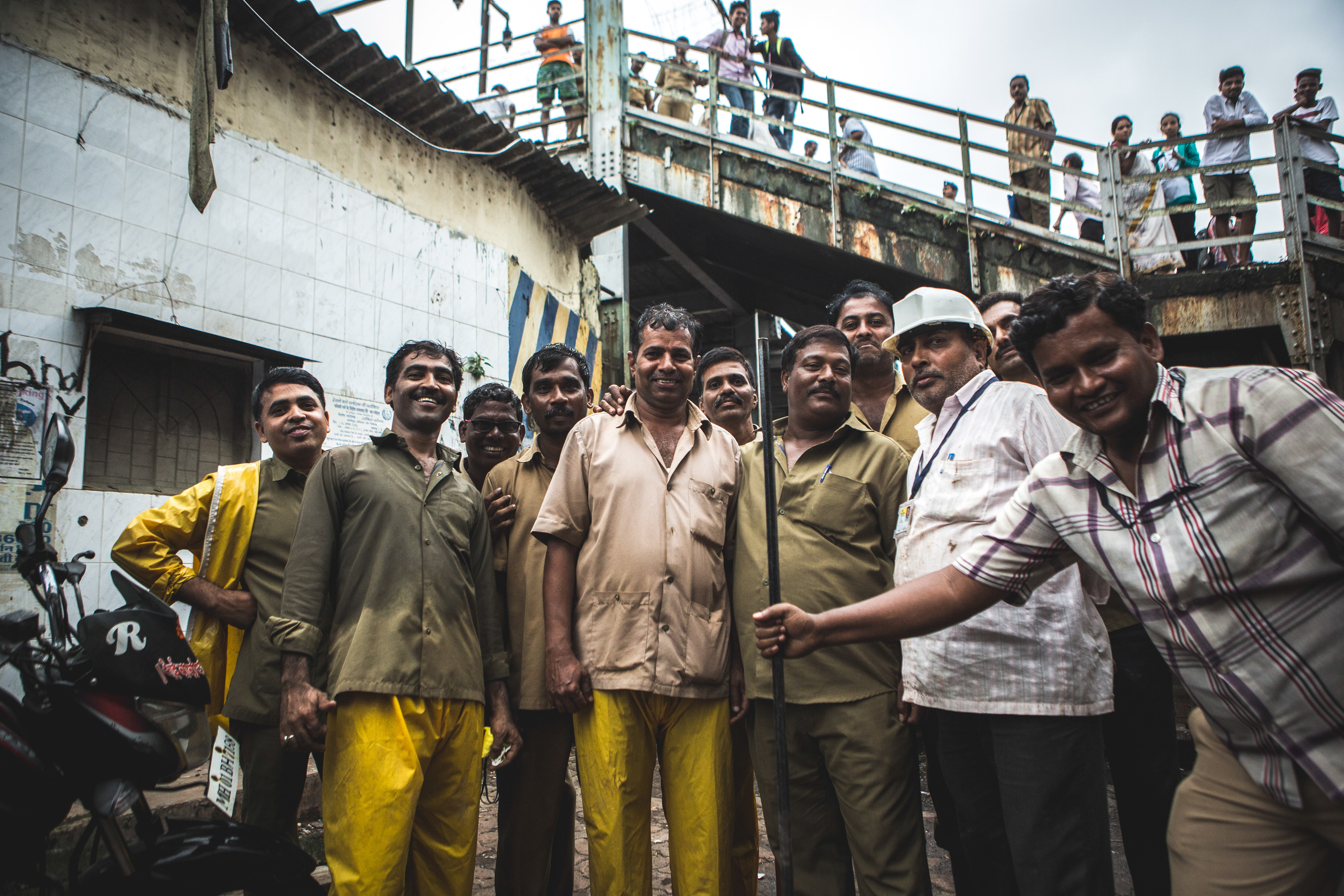 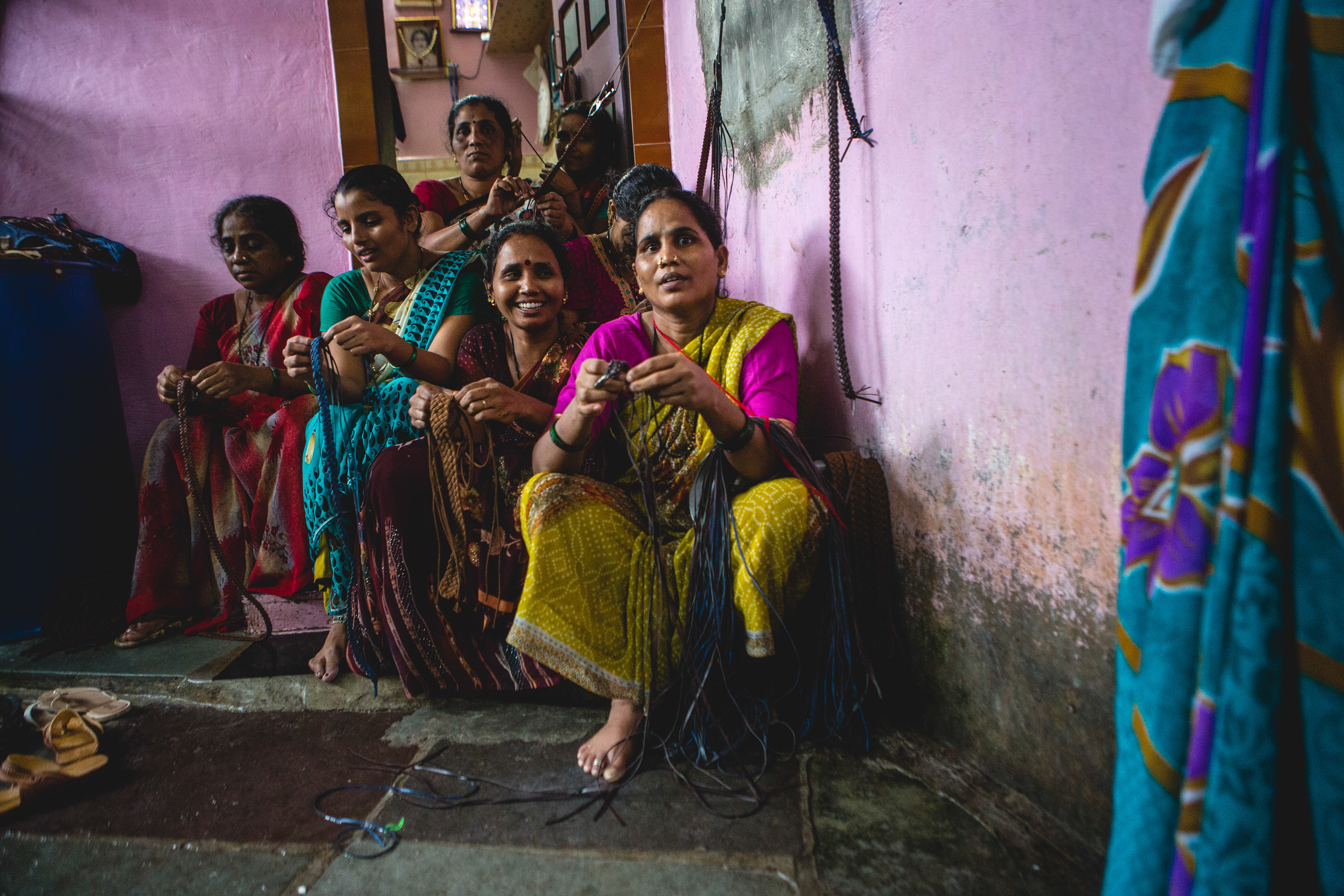 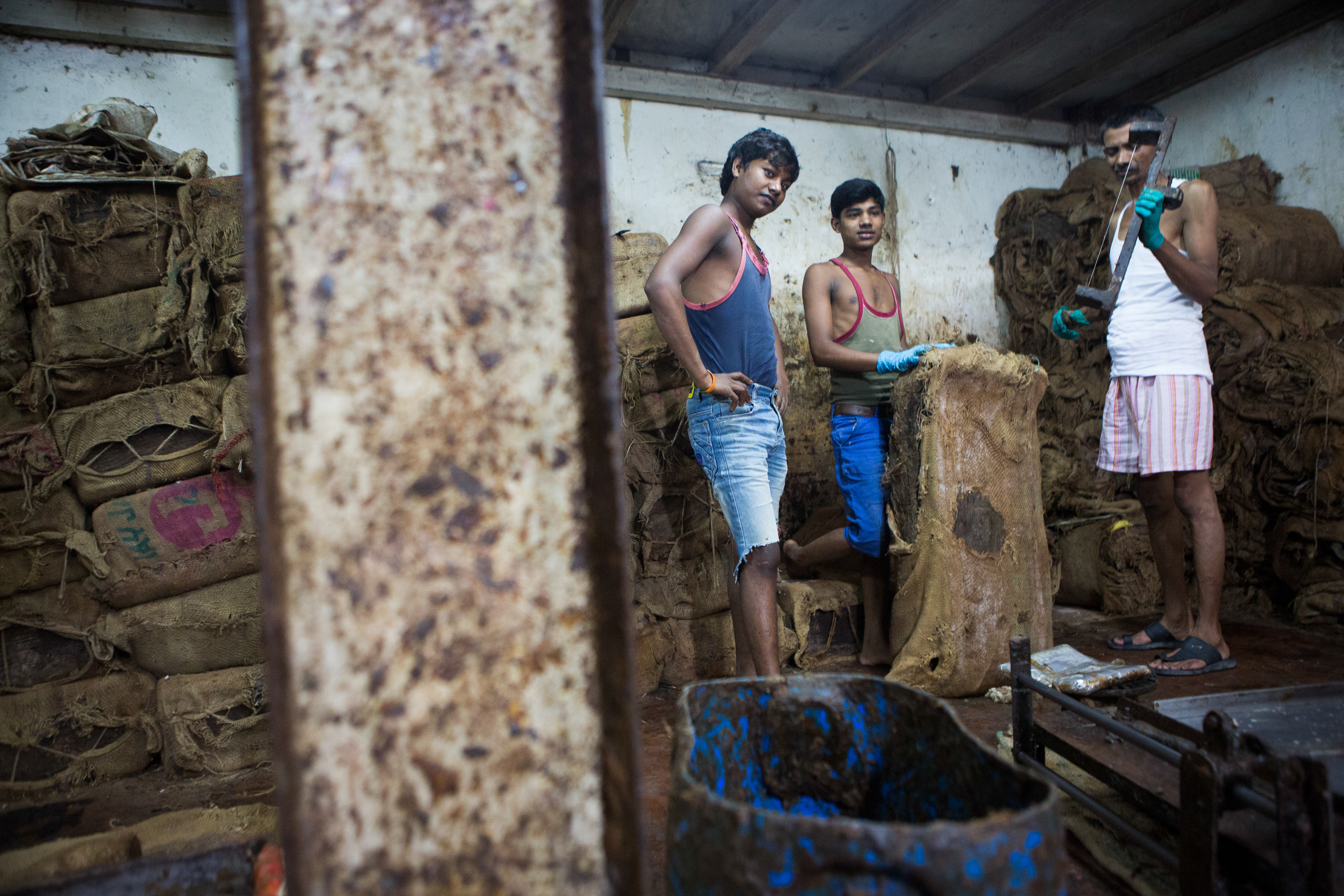 Laborers, artisans, residents and visitors. Dharavi, Mumbai is an incredibly vibrant and industrious place. Far from being idle, it's estimated that this small slum has a GDP of almost $1 Billion. Most of this is due to informal recycling programs, such as the above images, where residents illegally smelt aluminum, create ornamental doorknobs from scrap metal, weave leather scraps, re-melt and package scraps of hotel soap, and collect plastic rubbish.

​​​​​​​This river represents an extreme wealth gap in Mumbai. The building in the upper left of this photo is the Oil and Natural Gas Corporation LTD, which bills itself as "India's largest profit making company". On the right is the edge of Dharavi slum, once India's largest slum, and the setting for the film "Slumdog Millionaire".

This bridge will connect the Bandra Kurla complex to several transport links in Dharavi, on the opposite side of the Mithi River.

The exceedingly sharp contrast between single-story slums and developed areas is stark.

Slum dwellers in Mumbai's northern sections use blue tarps to protect against the monsoon rains. The houses are packed so tightly together it's impossible to see the pathways between them from above.

Slums line a branch of the Mithi River near the National Stock Exchange.

Another view of the Mahim Nature Park, with the visitor's center visible as a open circular building on the left. The entrance to the park costs 10 rupees, "less than a cup of tea", and provides a shaded natural getaway to the chaos of Dharavi's urban canyons.

Minneapolis
↑Back to Top