The Safe Sleeping Village on Fulton St, just in front of City Hall in San Francisco, is a damning indictment of capitalism in one of the USA's most wealthy cities. Skyrocketing housing prices mean thousands sleep in tents like these, and a poor social safety net means that many needs are going unmet. "Villages" like this one (which I've also documented in Seattle) are only appearing in San Francsico because of external factors, like the COVID-19 pandemic, and do not represent any real change in social policy.

California.
It's a state with a name synonymous with excess. The "Golden State" is home to the richest companies, the biggest movie stars, the most innovative tech. It has the most people, the widest freeways...even the highest mountain, and the lowest valley.
California is a state which represents the exceptionalism Americans learn from an early age - that this place is different than any other; perhaps divinely ordained, but certainly blessed. If you try hard enough, you can make it. Even the steel wall at the southern border of the state seems like a test designed to weed out the ones who "want it the most"...if you can surmount it, you can reap untold rewards.
Social mobility, even physical mobility, are presented in a tantalizing buffet of options and opportunities. Vast freeways carry millions of commuters in and out of the major cities of San Francisco and LA, to and from some of the world's best universities, which supply the world's best industries with employees and innovators. But California also showcases the falsity of relying on myth and anecdotal evidence to explain the "American Dream". Traffic inches past the homeless in the Bay Area, open-air drug markets exist within blocks of downtown LA, and Silicon Valley's biggest firms share real estate with tent cities. The lesson here is that wealth is jealousy guarded, vastly stratified, and overwhelmingly held at the top. Not all of this can be explained by a lack of ambition or capability by citizens - it is a system which systemically oppresses minorities, women, and the working class. It is a system which does not provide adequate social services or housing, not because of a coherent political philosophy, but because of a clever disinformation campaign on behalf of the moneyed upper class.
This is an insidious, and odious, status quo - but not a new one. California has had a housing crisis for years, immigrant workers have been exploited since the beginning of time, and now tech disruption threatens the very notion of workers' rights. But the Golden State also has a long, wonderful, and successful history of progressive social movements. People around the world look here for leadership on social, fiscal, and environmental guidance. California is too big to be ignored, the world's fifth largest economy (when taken apart from the rest of the USA), and has the ability to be a massive, even revolutionary, change-making entity in economic and political arenas.
It's up to them to do it.

Silicon Valley is home to some of the world's most valuable companies, such as Facebook (pictured here). The headquarters of the company, worth approximately $800 billion, sits opposite from a homeless camp in the scrubland surrounding San Francisco Bay.

Dozens of mobile homes are lined up on this street in Mountain View, just about a mile from Google's headquarters. With a median sale price of over $1,400,000, homes in Silicon Valley are become unobtainable to the many workers in retail, landscaping, food service and other industries which require unskilled labor, making camping on the street a necessary evil for hundreds of people. 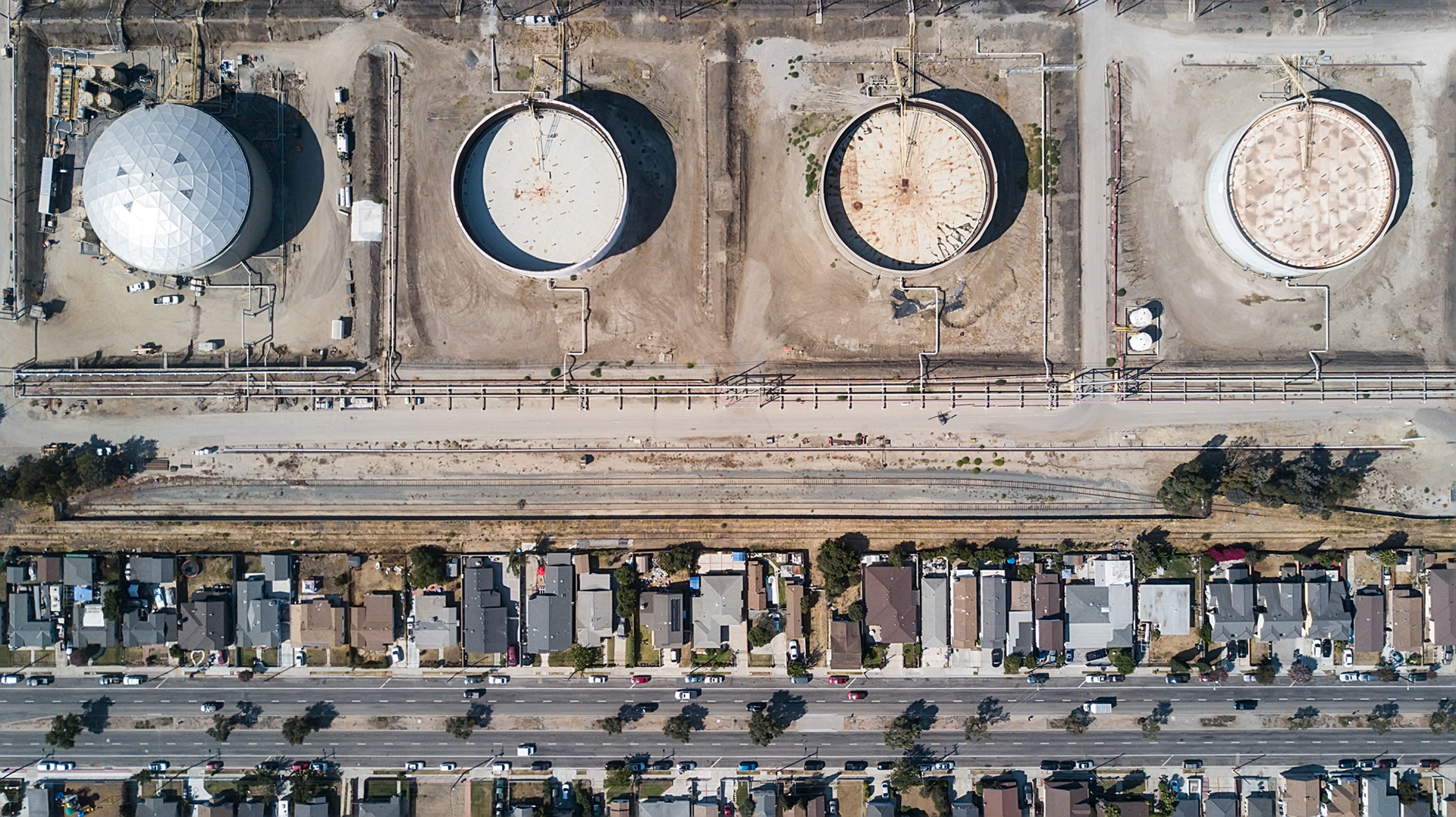 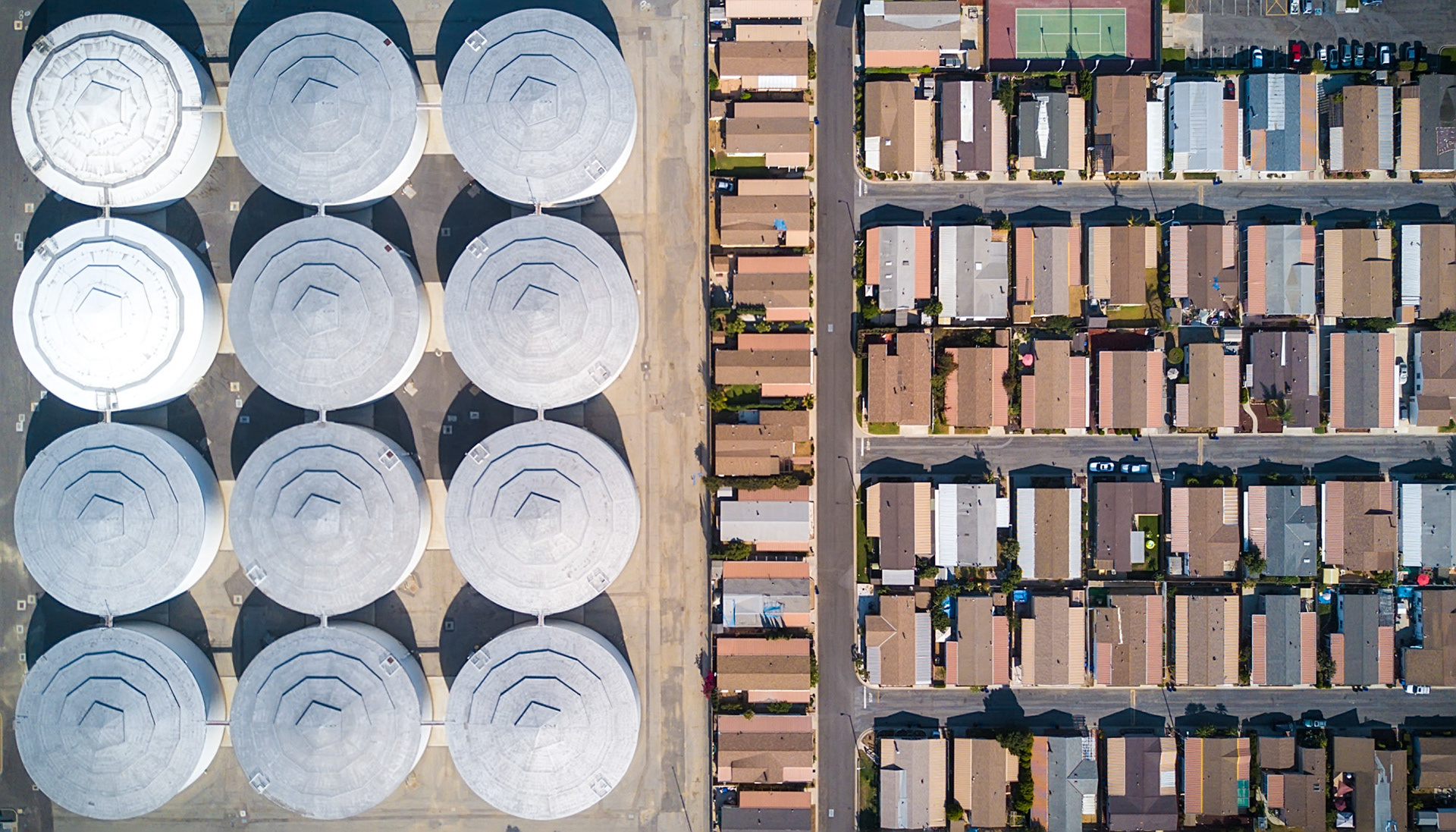 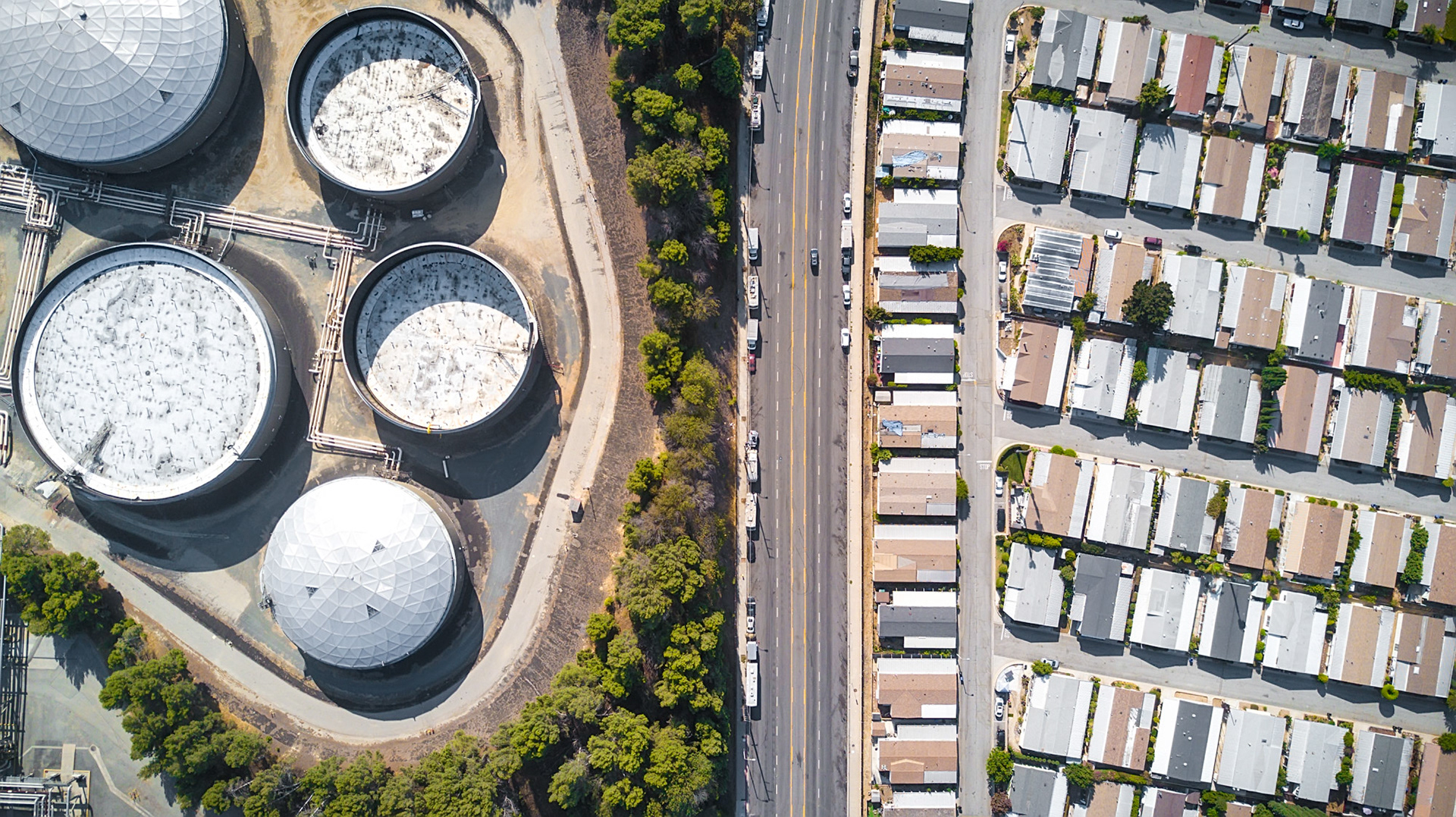 Southern California is a major oil producer, and storage facilities and refineries make for uncomfortable bedfellows for working class neighborhoods like these.

Traffic on I-880 in Oakland, CA inches past a homeless encampment during rush hour.

The heart of Skid Row sits almost in the shadows of LA's financial and theater district.

The term "Skid Row" refers to an impoverished area where people are "on the skids". But it's also a real place just blocks from downtown LA. Hundreds of tents line the streets in a surreal sort of truce with city officials, who allow it all to transpire in full view of the LAPD central station.

Minneapolis
↑Back to Top