The concrete barrier which separates Shaker Heights from Cleveland on E 177th St.

Cleveland, Ohio is a compact, medium-sized city on the shores of Lake Erie. Largely industrial, it followed the same trajectory as many of the cities of the "Rust Belt", with a heyday in the early 20th century and ensuing decline ever since. Like many midwestern American cities, it also accommodated large numbers of African-Americans who migrated north after WWII in search of jobs and affordable housing, settling in neighborhoods throughout the city, including the one here, on the border of the city limits of Cleveland and a suburb called "Shaker Heights".
By 1959, tensions between the two neighborhoods had already reached a point that Shaker Heights was considering erecting traffic barriers between them, although it took until 1976 for temporary traffic barrels to be placed on six streets in the Lomond neighborhood of Shaker Heights. "Unsurprisingly, the roadblocks...were perceived as a racially driven decision by many Cleveland residents, some even decrying 'the Berlin Wall for black people.'"
"A Common Pleas Court hearing in 1985 resulted in an order to take down the barriers immediately at the suburb’s expense. The ruling was soon met by a 60-day reprieve ordered for Shaker Heights until the barricade dispute was officially settled. By 1987, after an 11-year conflict, the Ohio Supreme Court overturned the prior court rulings and stated that the suburb had constitutional rights when it first installed the traffic diverters. Shaker was now legally able to keep the barricades on the streets where they were permanent."
(Research taken from: https://clevelandhistorical.org/items/show/824)

Concrete bollards still exist between the two communities, even on the sidewalk.

Today, the two communities are racially mixed, and critics of the "racist reasoning" argument point to the fact that Shaker Heights was a diverse neighborhood in the 1970s, and not exclusively white. While this is true, it may reflect the blurry distinction between class, race, and wealth. The same thing exists in the Grosse Pointe area of Detroit and many other parts of the country, where decisions taken to ensconce wealthy communities in brick and concrete have outlasted their original populations by many decades.
In Shaker Heights, at least outwardly, both communities seem peaceful, though separate. In my mind, the bollards and concrete planters in the streets seem like sad anachronisms. I doubt many residents even notice them anymore. But the point of this project, in Cleveland and elsewhere, is to highlight these absurd design features of separation. This will hopefully spark conversation about what it means to exclude and balkanize our populations - what it means to be a "community".
Barriers and walls are much harder to see in the 21st century - we have become a more sophisticated society, and piles of concrete poured into streets aren't common anymore (although the pendulum does seem to be swinging back that way) - but do they not still exist? In my opinion, we have simply figured out ways to enable oppression behind paywalls, access, glass ceilings, austerity measures and tax cuts. These concrete walls will inevitably crumble and weather with age, and so will our new digital versions. Will we rebuild them the same way?

The barrier, a concrete tree planter, on E 173rd St.

Curiously, the "no outlet" signs are only visible from the Cleveland side (historically, the poorer side) of the divide on 173rd St. On the other side, there are no signs at all. 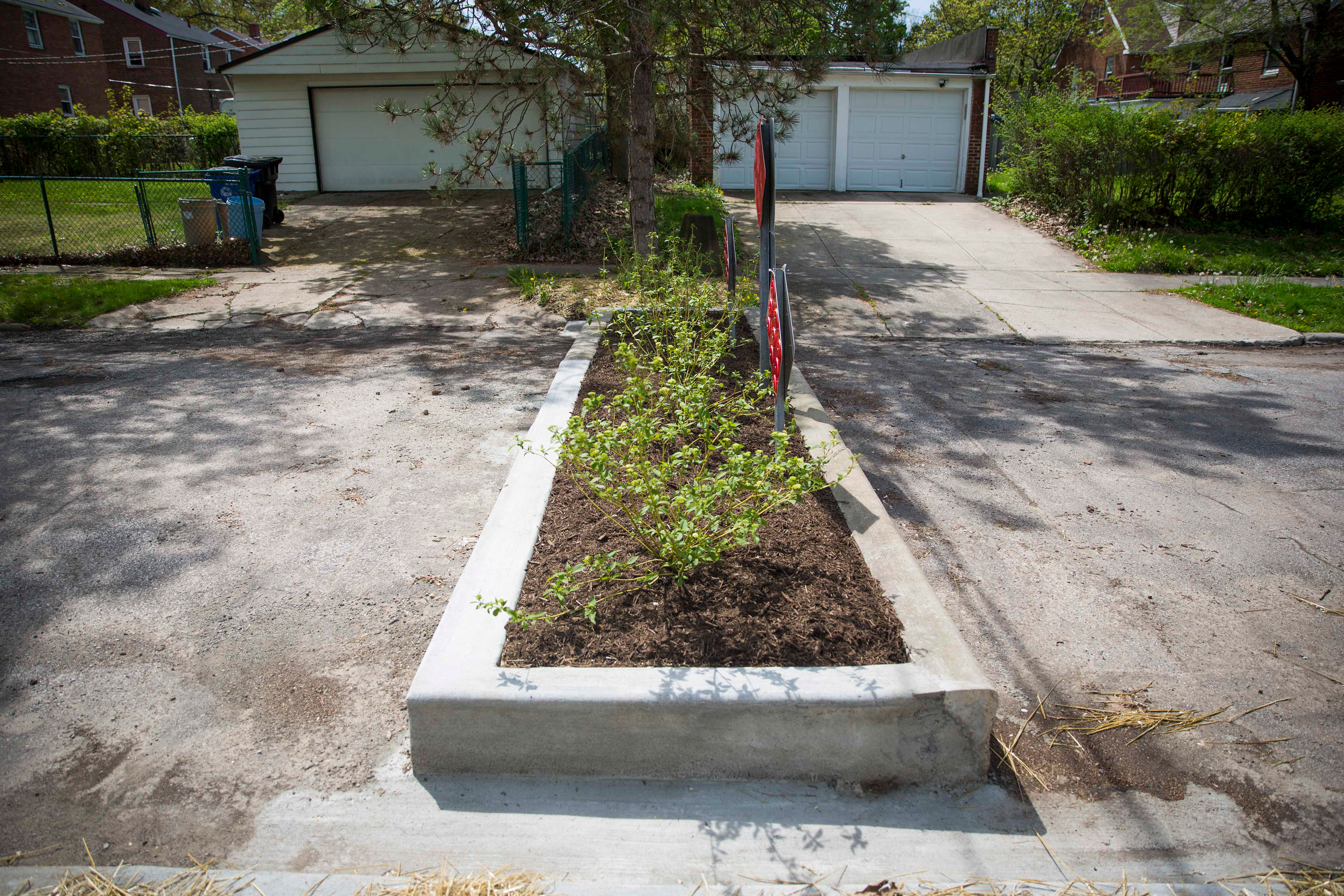 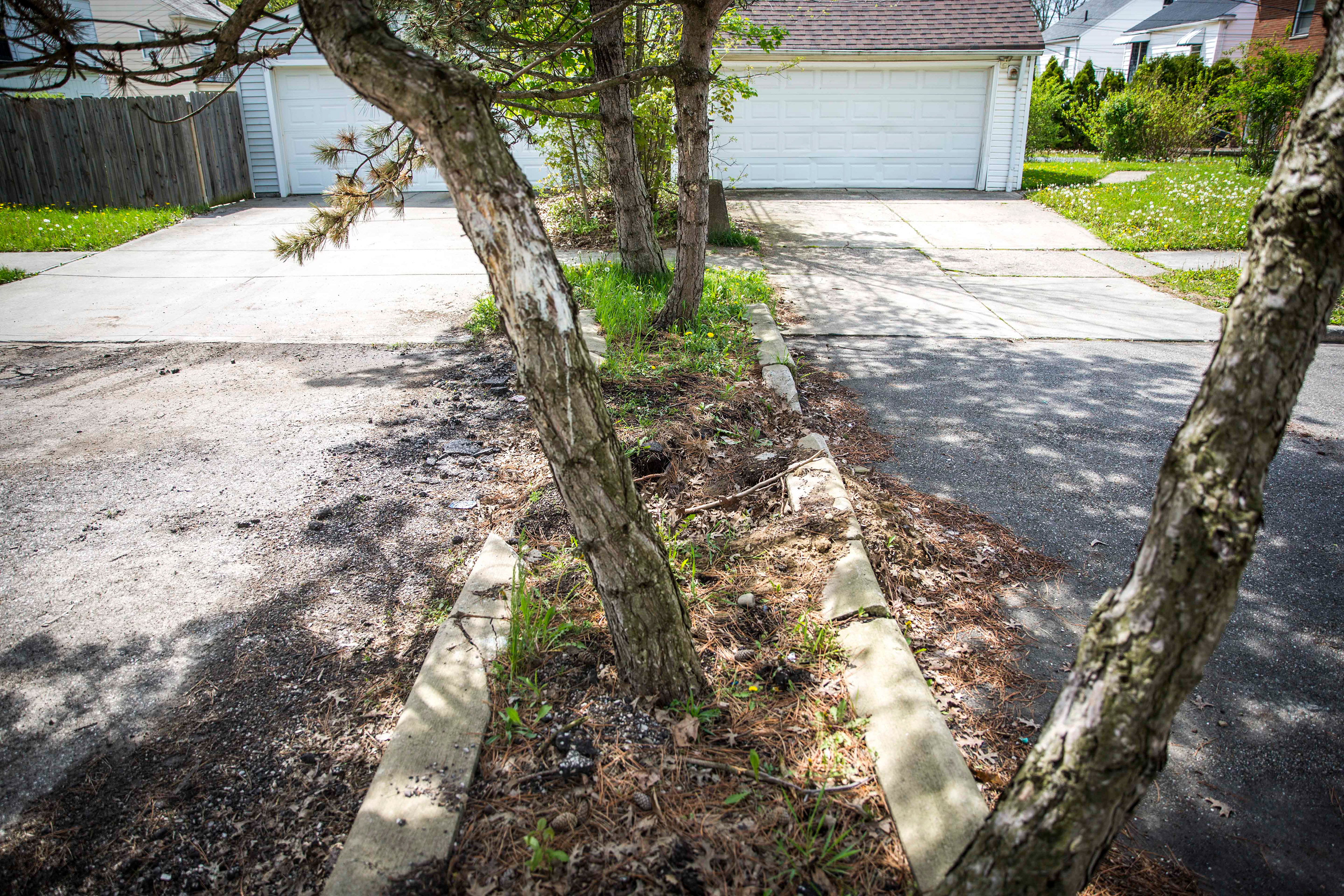 There is no direct way to cross between the two neighborhoods by vehicle.

The Google map of the area shows the divide between the two neighborhoods.

Note the squiggles on E 173rd and 177th Streets, denoting the existence of blockades in the roadway.

Even the entrance to Scottsdale Blvd, not shown on the map above, is blocked into a one-way street at the intersection with Lee Rd. 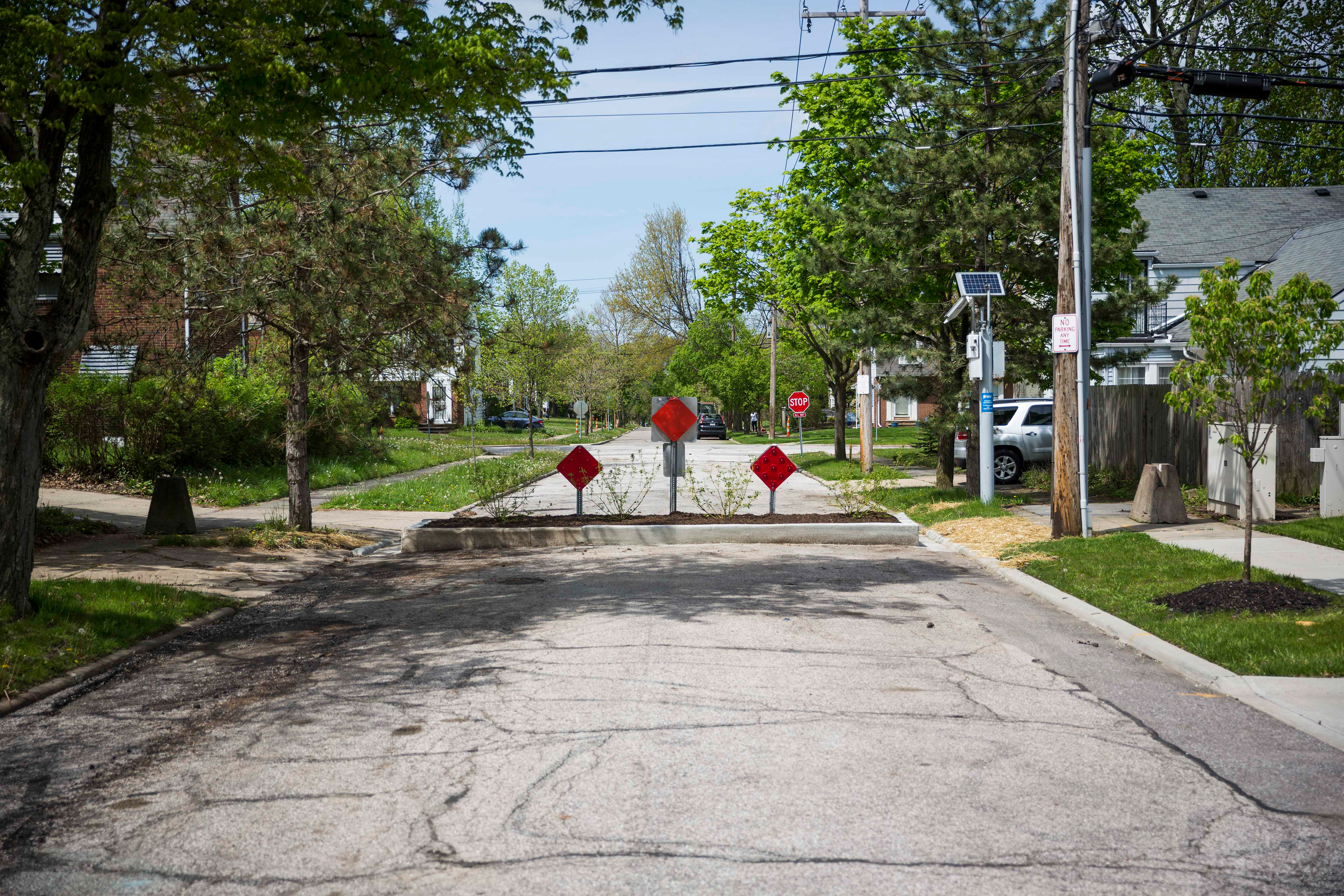 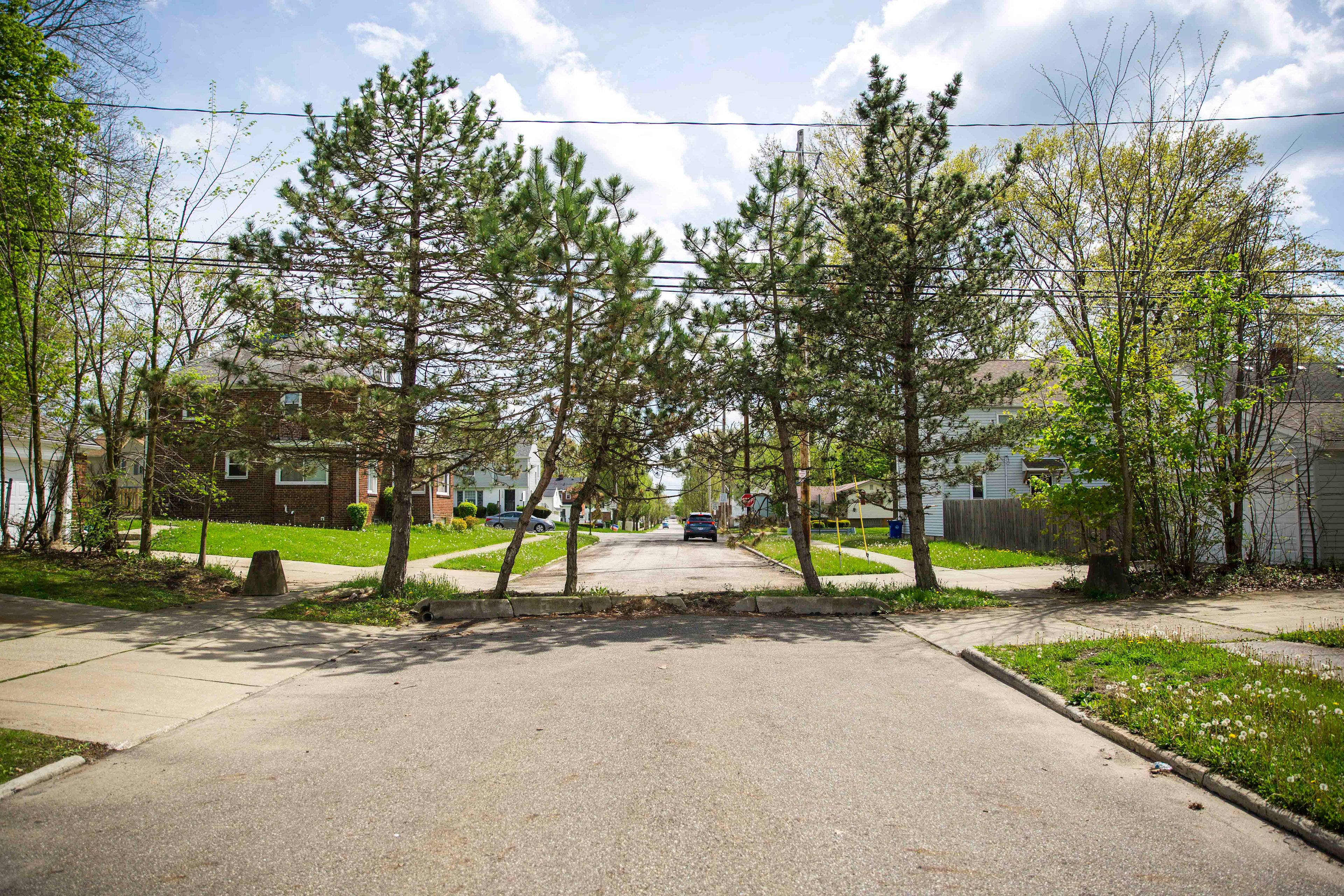 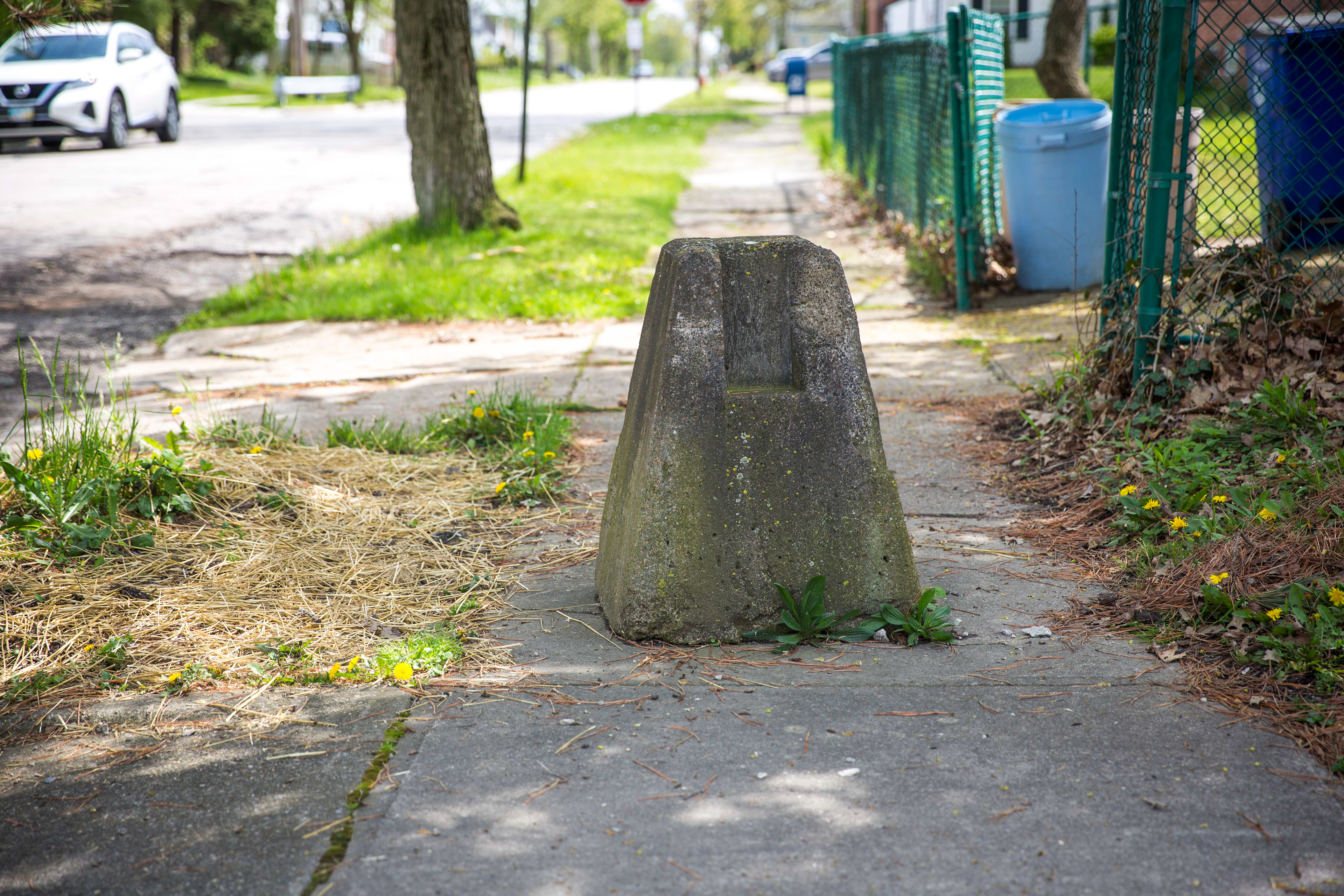 Shaker Heights, with the skyscrapers of the city of Cleveland in the background.

Namibia
↑Back to Top